WASHINGTON C.H., OH- Mindy Hatfield, 34 Washington C.H., pleaded guilty to charges of Prohibitions concerning companion animals during a pretrial hearing at the Municipal Court on Thursday. The two second-degree misdemeanor charges resulted in Hatfield being ordered to pay a $300 fine, no ownership of animals for three years, and a 30-day jail suspension.

On Tuesday, October 6, Humane Agents responded to a call about a weak, skinny dog having trouble walking at a home in Washington C.H.

When humane agents arrived, they found a white pit bull mix-type dog confined to the front porch of the residence. The senior-aged dog was underweight with ribs, spine, and hipbones being prominent, and at one point, the dog fell while he was walking. A black hardened substance or residue was on the top of its head with hair loss and long toenails. The owner told humane agents that the dog began losing appetite at the beginning of the month.

Humane Agents took custody of the dog and transported him to a veterinary clinic where he weighed only 46 pounds. The veterinarian noted how “the dog had white hair, but due to the severity of live fleas and dried blood (flea debris), he appeared to have areas of black.” The dog also had grade 4 periodontal disease with drainage, double ear infection, and hard, dry feces were removed, which supported dehydration according to the veterinarian. Hookworms were found during the examination aside from severe anemia that was revealed through blood work.

Humane euthanasia was recommended by the veterinarian and performed due to the severity of the dog’s condition. 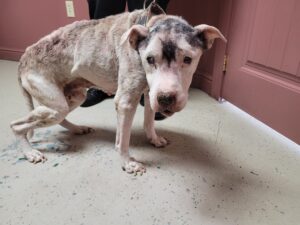